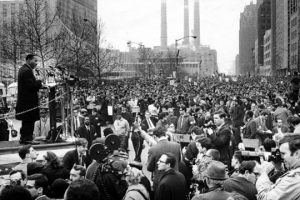 Against a backdrop of the United Nations headquarters in New York, Dr. Martin Luther King Jr. told an estimated 125,000 peace marchers on April 18, 1967, that the US should end the bombing campaign against North Vietnam. He also urged students to organize against the war.
John Littlewood_The Christian Science Monitor